The Anatomy of the Soul in Nordic Traditions.

The parts of the construct we moderners call the "self" in Norse tradition are actually very advanced and complex, difficult to put into modern English words. Our language is very cold and rigid, theirs was full of feeling and conviction, but also with an odd fluidity where words related to many other words and the collective concepts all had something to do with one another. This later facet is seen in what the Nords called "kennings" and is the basis of much rune lore and galdr magic, but that is a whole other subject. This blog will explain some of the more advanced concepts behind the various parts of what makes us human from the Old Norse perspective. I have always found this particular part of the religion very enlightened, but it takes more than rough translations of words to show how truly enlightened it really is. Much of my time spent studying Norse traditions and magic was devoted to understanding things within the context of the culture and "reading between the lines" to understand the deeper meanings or "kennings" of words. I hope that knowledge show through in what I present here today.

The accepted parts of the human in Norse tradition are Líkamr and Hamr, Hugr and Munr, The Fylgja, and The Hamingja.

Ǫnd, óð, lá, læti and litr are all part of the likamr. These roughly translate to "breath" "inspiration" "form" "movement" and "health" respectively and are listed as the gifts of Odin (and his brothers) when He (they) created the first humans out of an ash and an elm tree. Of course, these too are more complex concepts. Ond, for instance, is probably best described as equivalent to the Hindu concept of Prana. it is both the physical breath and the life-force of the universe as transmitted through breath while óð (also written odhr) is strangely translated as both "sense" and "madness" depending on context and is probably better described with the Welsh word "Awen" or the Old Irish "Imbas" and refers to the Divine Will as transmitted from God through mankind.

Lá, læti and litr link the Likamr with the Hamr. Lá is the actual physical form or shape, læti is movement and force or energy as trasfered via the body, and litr is the vital essence which gives the color and "spark" of life to living flesh. These combined manifest the Hamr which is the personal sphere of existence, the "analog" if you will between the self and the world around you. The interesting thing about Hamr is that while it is generally regarded as the physical body, it is very much a changeable thing. Hamr can be thought of as how others perceive you and, through certain spiritual and physical disciplines, can be altered so that one is perceived in different ways. The ancient notion of "shape-shifting" is rooted in this discipline. Modern witches may refer to it as "glamour' or a form of telepathic suggestion wherein another perceives what one wills them to perceive.

Hugr and Munr are best known through the names of Odin's ravens "Hugn" and "Munin" or "thought" and "memory" which is satisfactory, but still falls short. Hugr is the analytical part of the brain, the rational, reasoning, logical form of thought. Munr is the artistic, emotional, and intuitive side of the mind, which is seen to be rooted in past experiences, but also in connection with Divine Will. As such, it is translated as "memory" but it is also the bridge which connects the mind and spirit by way of the óð, thus linking past, present and future through thoughts, memories and actions.
The Fylgja, and The Hamingja. are the most esoteric.The Fylgja is often modernized as "fetch" and is seen as a sort of "familiar" or "totem" when it is perhaps best described as the astral body... yet, still, this is not completely accurate. Fylgja is sometimes translated as "follower" though, more often than not, it precedes the physical body. I often think of the scene in "Donnie Darkko" when the eponymous character sees the odd orb of viscous, shimmery, substance which leads him through the house to his father's gun. Fylgja is the outer manifestation of will before it comes into formation. It is the "quantum observer" if you will, that which influences the outcome as an extension of what is expected. There is another word, "Mægen" commonly translated as "might" but is really the active force or collective power of an individual and all their various parts as discussed herein. Mægen is that which connects the Fylgja and the Hamr. It is the collective energies of all the other parts of the self which the Fylgja then seeks out the best match for. Mægen is therefore translated into "might" because the more all of those energies are in alignment, the more focused and potent the Fylgja which, in turn, makes the will all the more difficult to overcome. A Fylgja with potent Mægen is practically an unstoppable force.

Then there is the Hamingja. It is commonly described as "luck" though, in reality, it is more likely that what we call "luck" is more a byproduct of the Hamingja and Fylgja. Hamingja is connected with the ancestors, their collective deeds, as well as your own. Hamingja can be made stronger or weaker by way of right or wrong actions and mindfulness. It is embodied in the rune "ēðel" or "othila" which is translated as "estate" which itself is the physical embodiment of the legacy of a family and its name. Hamingja, therefore, is sometimes regarded as a sort of guardian spirit which hovers over and guides the individual in life. Like the Fylgja, it could be regarded as having a mind of its own, but it is important to remember it is not exactly conscious. Like a computer program, its actions are determined by the energies or "code" put into it. If there is a lot of "bad juju" in your family history, it then falls to you to balance out and contribute good energy to your Hamingja and to overcome that which guides you down the same paths as your ancestors. In this way, Hamingja is somewhat linked with the concept of "karma" which the Norse also have some interesting concepts for.
Wyrd and Ørlög make up what we might call "karma" and, like everything else discussed here, are unique to Norse ontology. Both can be described as "fate" but Wyrd is the fate that you weave through words and deeds while Ørlög is the predetermined and inescapable product of natural law. To draw a parallel with Hinduism they would be like karma and dharma respectively, but, again, they are not exactly the same. Everything you do and say affects your Wyrd, which in turn affects your luck and the ongoing flow of your life. Ørlög is more primal, less defined, and less changeable. Ørlög extends quite a lot from your Hamingja while Wyrd can be seen more as an extension of Hamr. The relationship between the words "Hamingja" and "Hamr" is apparent and Wyrd and Ørlög are the bridges between them and between the energetic world of the Divine with the physical world of mundane life. If Hamr is the self in the current form and Hamingja the self, or selves, which manifest this current form, then wyrd is the fate shaped by this form and Ørlög the fate shaped by the other.
In later day traditions there is a sort of "demon" or spirit called "Loke" who can be appealed to in various ways to influence luck as evidenced by a variety of later day staves or sigils designed to bring luck in various ways such as at market or fishing. The spirit is associated in many ways with "shimmering" things, light, fire, etc. There is every likelihood that this spirit is Derrived from the "trickster" God, and Odin's blood-brother, Loki. It is also interesting that the descriptions and etymologies of various words related to "Loke" bear a striking resemblance to those of the name "Lucifer" the fallen angel and erstwhile God of various denominations and lineages of traditional, old-world, witchcraft. It may be that when one must overcome their Hamingja, or perhaps attempt to influence their Ørlög, that this is the spirit to which one must appeal.

The following formulas, and much more, can be found in my book "Backwoods Shamanism" available on Amazon and Kindle. The next book in the series, "Hillbilly Bones and Backwater Blood" will go into deeper detail about the the North American Maroons from whom I am descended, and our nearly forgotten spiritual traditions. "Backwoods Shamanism" is something of a primer to the upcoming book. Though it is supposed to be about "hoodoo" you will find some differences in what I have written and what is commonly known as "hoodoo" today. I have a theory that "hoodoo" was at least influenced by, if not stemmed from, our hereditary traditions. 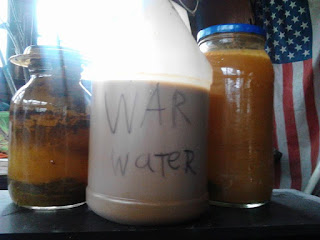 First and foremost, what is "war water" exactly? Well, you first have to understand the term "water" in traditional rootwork and conjure does not necessarily mean dihydrogen monoxide like what comes from taps. When we talk about "waters" what we actually mean is a liquid agent or solution which mat be based in any number of fluid media. "Four thieves vinegar" and "carmelite water" are both "waters" but one is based in vinegar and the other in ethyl alcohol. The war water we are making today is two-part and the final product actually has a third, but we will get to that in time.

War water is often avoided by new-agers because it sounds scary and is commonly associated with "dark magic" or "evil intent" which is not really the case. It has a variety of applications, mostly protective, but it can be used aggressively too. In either case, it is something every serious practitioner should have on hand at all ti… 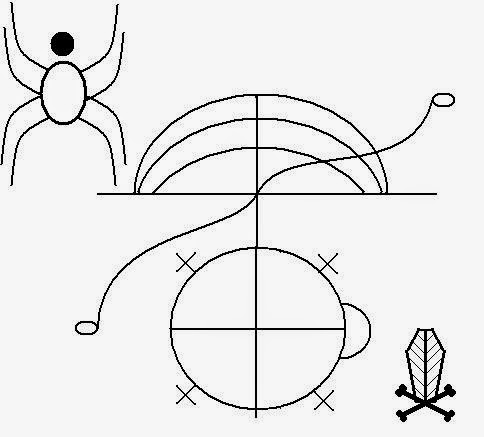 Like hoodoo, Obeah is not a religion, it is a system, an approach to magical practice. Perhaps more appropriately is a particular type of magical power, but more on that later. Many today would call obeah "shamanic" in it's methods and "witchcraft" in practical application. It is as much about healing as it is about aggressive action. It is a power and a means of deploying that power. Obeah has its roots in Africa, likely around the gold cost, but is most associated with the Caribbean islands. Its cultural and political histories are deep and fascinating in and of themselves, but the purposes of this article are to address the nature of this elusive magical practice.
Obeah deals with many spirits and deals with them directly, not through spells and prayers, but through conjuration and possession. Items are imbued or used to house entities and sigils may be drawn or words of power written while in a state of shamanic fervor. The spirits may be kabbalistic, goetic…